This website uses cookies to ensure you get the best experience on our website.
Got It!
ELECTIONS
Our Nomination Convention
The nomination convention announced below took place as announced, and successfully nominated nine candidates.

For more information on the candidates, see Candidates. 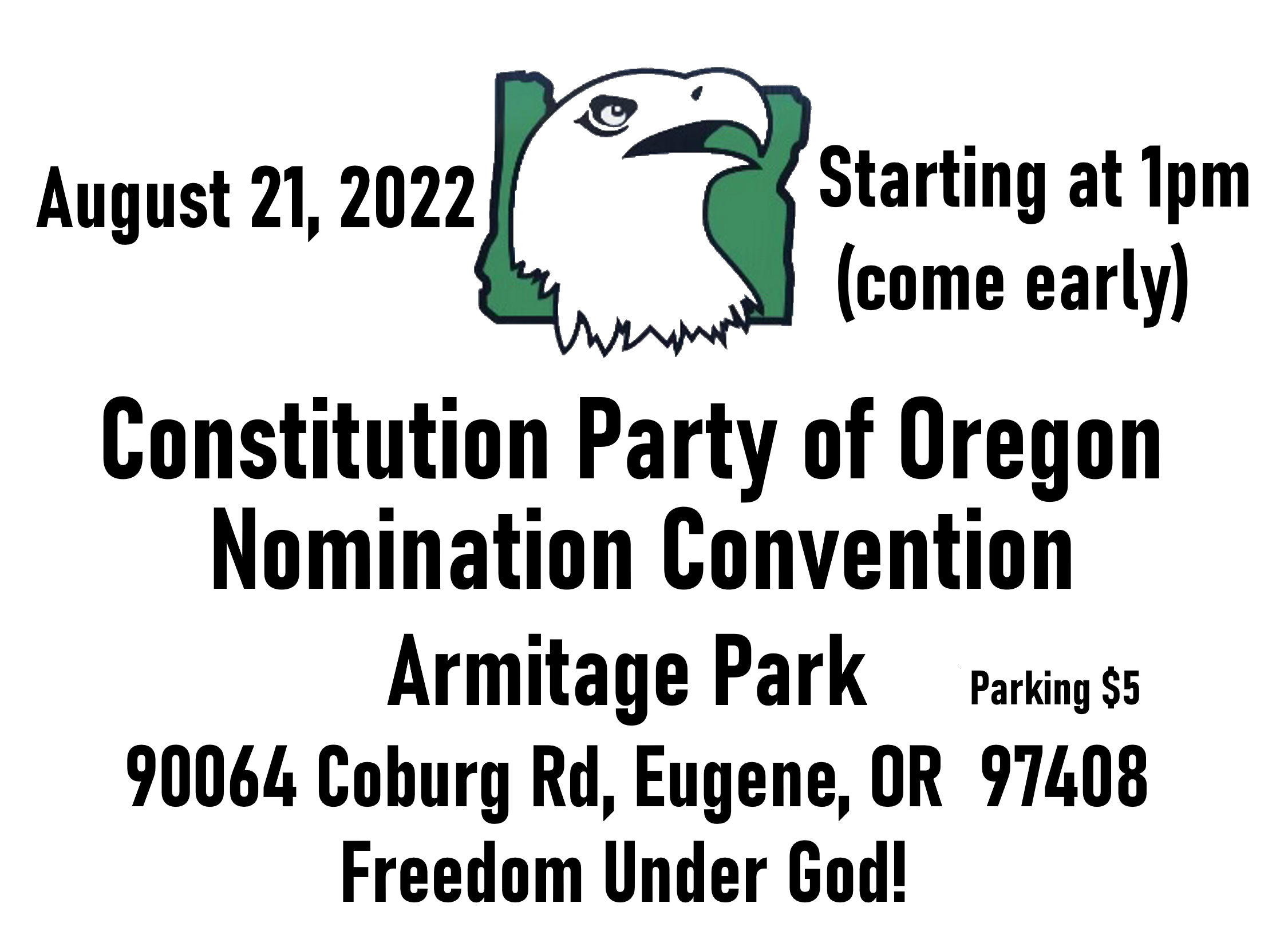 This will give every voter that has registered prior to the election a vote. Bring proof of registration; without that no vote will be accepted.

Nominations will be made for governor, and all state and federal legislative positions, and a vote taken. This is in lieu of a primary election.

No other meetings will take place on that day.

The recent release of 2000 Mules and the information presented by Dr. Douglas Frank and others have brought the issue of election integrity to the awareness of many.

How shall we feel secure when our governmental representation is subverted to place the power in the hands of those who are not elected by the people? Only as we the people stand up and demand fair and free elections, with votes counted not by machines but by honorable people who give an honest account, will we have the freedom we should by all rights enjoy.

We must know how to combat the treachery the enemies of our Republic want to foist on us. Eliminate vote-by-mail, make absentee ballots rare, ensure that only qualified voters vote, count by hand. If anything other than these occur, document it. Record it on video and in pictures, share it with neighbors, with election officials, and with your local sheriff. Attend political committee meetings to insist on honesty; show the evidence and demand solutions.

Give every registered voter a vote; eliminate those who are no longer registered due to death, removal to another state or county, or failure to prove their citizenship.

Minor Parties, including the CPO

Those minor parties whose ideas have merit—the Constitution Party of Oregon is one such, promoting the Constitution of the United States and that of Oregon—aspire soon to attain the status of a major party, and although they then may subject themselves to the concerns listed above, will have the mutual consent of tens of thousands of Oregonians, granting all members a vote in their decisions.

Even now, the Constitution Party has had an outsized impact, with some past candidates receiving a total number of votes that exceeded party membership by more than fifty times. What will be our impact when we become a major party?

To reach this point, it is imperative that the effort begin at the grassroots level, beginning with the precincts, joining together to form county organizations, and then to constitute a robust organism at the state level.

In the meantime, our bylaws provide an alternative: the steering committee. Chairs are appointed to head up a county in which no county organization already exists. The various county chairs constitute the steering committee, which makes the decisions for the party until it can be suitably organized. In rare circumstances, an executive committee, holding offices recognized by the Secretary of State, may make decisions for the whole party, taking on such tasks as officially interviewing those interested in a role in the party organization, or as a candidate, and other tasks as may be urgently needed from time to time and that do not require the oversight of the whole committee.

The steering committee meets quarterly; and once every two years, on the Saturday after the primary election, in what is formally called an assembly of delegates, meets to nominate candidates for the general election in November. Until that date in May, anyone may put him- or herself forward as a candidate for our nomination, but that person does not receive the nomination—become a nominee, a candidate for office—until that assembly takes place in May. The bylaws also provide the steering committee an opportunity to make resolutions, including nominations, by email between meetings, and nominations for the general election can be made as late as the Secretary of State allows, up until about six weeks prior to the election.

Minor parties labor under a different set of laws and assumptions than do major parties. The first of these differences is that voters need not be a member of our party in order to receive our nomination. The so-called “sore loser law” mandates that we not nominate anyone who is registered as a candidate for a major party and subsequently loses in the primary, but every other voter in the state is eligible. Also, our nomination process is laid out in our bylaws; it is not a part of state law—which instead prescribes that we must follow our bylaws to the letter—and therefore is not considered an “election” but is merely a nomination of candidates for the November election, at which point our nominee does become a person controlled by state election law.

In September 2021, Paul Romero put himself forward as a candidate for our nomination for governor; later Michael Stettler and Republican Jo Rae Perkins asked for consideration as nominees for the US Senate; several others, some of them Republicans who had won their primaries, did the same in their respective districts immediately prior to the assembly. (Although had Ms. Perkins not won her primary, she, too, would have been forbidden to receive our nomination.)

In summer 2021, Mr. Romero had been running as a Republican when it was first suggested that he seek the Constitution Party nomination. Shortly after, he changed his registration and began courting the CPO. At that time, he was the only candidate seeking our nomination, having begun early to run for the governor’s office.

In February, the quarterly meeting of the steering committee took place at Paul Romero’s house, and during that meeting, several newly appointed chairs were confirmed as voting members of the steering committee. Immediately afterward, however, several of Paul’s staff resigned with allegations of verbal abuse by Paul, who without delay went “on the warpath,” making allegations of impropriety—two of those staff had just been affirmed as voting chairs—and as time went by attempted a takeover of our process. Paul encouraged his supporters to volunteer for appointment to vacant county chair positions. One supporter, good at web design, in large part took over the redesign of our website. Without discussion or the prerequisite vote of the party, he set forth Paul Romero and Michael Stettler as our candidates; later the verbiage was adjusted some to try to clarify that Paul was a candidate seeking our nomination, but not yet chosen by the party. Paul, however, has always asserted that he was our sole candidate (something he could not know), and now asserts we cannot take the nomination promised him away. In truth, no one in the party, not even the chair, had the authority to, nor would have, promised Paul the nomination.

A few weeks prior to the Assembly, another candidate came forward, Donice N. Smith, perhaps better known as Maggie Rose McGrath, her alias as long-time host of her own talk show. Mrs. Smith, once Mr. Romero’s campaign manager, did not make the announcement public, as is her prerogative.

Nominations at the Assembly proceeded in order; first, for lower offices, then for Senate, then lastly for governor. The steering committed consisted at the time of thirteen chairs, with a majority of all chairs needed to win. One was absent, but even in his absence, seven notes were needed.

Several things were observed during the course of the Assembly that were out of order. Paul brought out resolutions that purported to appoint himself as the chair of Jackson County, and two supporters did the same for Crook and Tillamook Counties. While this action is not in itself inappropriate, this was done in defiance of the bylaws and as such had to be ruled out of order and the appointments laid aside.

Next, Paul attempted to sway the vote of one of the sitting chairs in favor of Michael Stettler; second, he threatened and attempted to intimidate his opponent, running for governor. Both of these actions, witnessed by at least four people, are against the law, class C felonies.

The vote between Michael Stettler and Jo Rae Perkins was undecided, so the nominator withdrew his nomination for Senate and suggested US House District 2 instead; this was accepted and both were affirmed, Jo Rae for Senate and Mr. Stettler for Congress.

Despite Paul’s actions, when the vote was taken on the nominations for governor, Paul received five votes; his opponent, six. Again neither candidate received a majority; the vote had to be judged indecisive, although the vote against Paul included two who had been encouraged to seek posts as county chairs by him.

After the Assembly concluded—the chair adjourned and dismissed the Assembly when time ran out in accordance to Robert’s Rules—a paper copy of an email to Paul Romero was found among items handed to the chair. This email listed the procedures to be taken by Michael Stettler to entrap the voting members; it also included a blacked-out item including the name of Solomon Yue.

This document impelled the steering committee to remove Paul and Michael Stettler from consideration as candidates, and Michael, for malfeasance, from his position as chair of Lake County. Mr. Stettler’s nomination had not yet been filed with the state.

Mr. Romero has cried foul and claims that crimes have been committed by adhering to our bylaws but doesn't admit to the authority they have under the Oregon Regulatory Statutes. Neither does he admit to the clear ruling of Oregon Election Law officials that the charges he alleges have no foundation. It is evident, therefore, that Paul Romero and his supporters claim to believe in the rule of law but are instead using the rules of warfare from an ancient Chinese strategist and mob rule in their attempt to destroy the party that they claim to support.

After the Assembly, another vote took place by email, in which Donice Smith received our nomination for governor, and paperwork thereto filed with the Secretary of State.

Real Issues Demand Serious, Conservative, Thinking Patriots
Basically, when RINO and Democrat Politicians say that their position is the correct one and cannot be questioned, be aware that they’re simply misleading you…

All Government Officials Must be Held to Constitutional Constructs, and Application of Existing Long Held Precedents